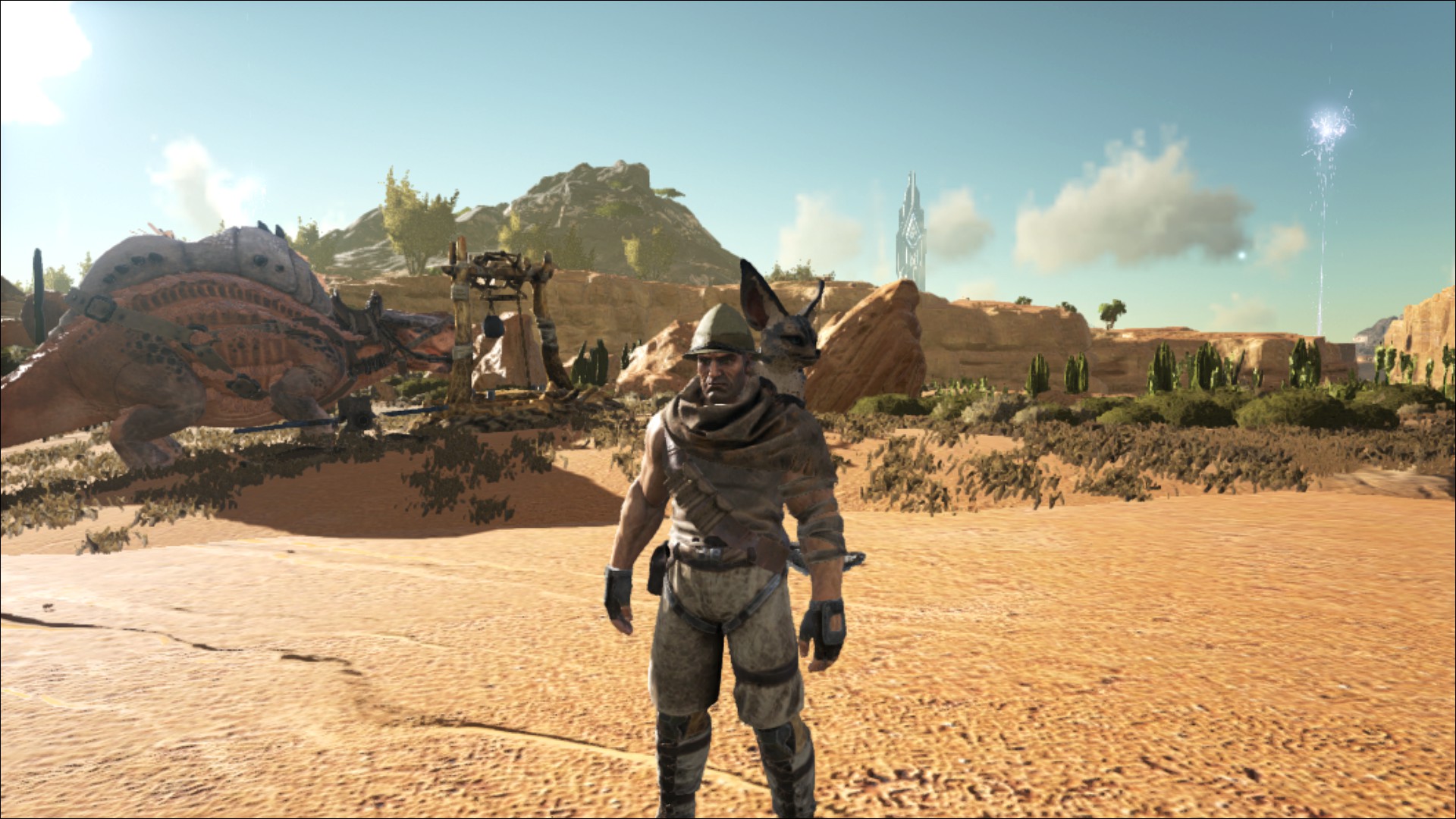 welcome to the Scorched Ark!

Hello again!!! I'm sure there is not that many people that are hanging on to the adventures of one geek in the ether, but still.  This post is overdue.

I just want to show off some of the great stuff that has been happening in the world of ark.  Since i have over 1600 hours into the game I can say with a great deal of certainty that this is my favorite pass time or all time.  What you see above is a screenshot of me inside the first expansion of Ark called "Scorched Earth."  The expansion brought a host of new creatures (some of them mythical) and it also brought the full fury of cross server transfers.  This is sort of the missing piece of the ark universe that makes the meta game absolutely amazing.  There will be a little more about the cross server non-sense in another post but for now I just want to talk about 1 year with Ark.

Scorched Earth was met with a split response from the player base.  The first group basically had a solid outrage of, "why would you sell me an expansion before the first game is even officially released?"  The second group had no response cause they were too busy loving the content.  I think that the offered price of $19.99 was better than fair, and I can state that by highlighting even though the Scorched Earth map is brutally hard, plenty of people have started playing there full time/exclusively.

What makes Scorched Earth so hard and so good?  You not only play against each other and the beasts roaming the map you play against the elements themselves.  The Ark Design team really went out on a limb here.  Everyone has regarded fortitude and water as "throw-away" stats in the standard ark maps because there is no reason to put points into them.  Well, that is not true anymore.  Fortitude is the most important stat in Scorched Earth.  Searing heat and bitter cold await you even in the most mild environs on the map.  Water loss is a real concern since water is few and far between.  Of the dozen or so watering holes in the center of the map you will find an abundance of life competing, as you would expect in the African wastes.  This makes surviving HARD.  Additionally to the water loss is the equally frustrating heat mechanic, which accelerates water loss.  The temperature on Scorched Earth routinely reaches 150+!!!! This will kill you if you are outside.  But the developers have given you tools to deal with this frustrating set of circumstances.  Dessert Armor.  It helps with water retention and fights heat stroke (an in game mechanic that ruins your vision until you pass out.)  There are also adobe building blocks so you can hide inside a building with get thermo properties instead of a stone or metal building which basically becomes a frying pan.  There is also the amazing addition of a tent!  This temp shelter allows you to hide from many of the dangerous weather conditions that you will encounter when you are far from base, but as a temp shelter it looses vitality when its erected till till it falls apart.  One could run into one of the many caves on the maps, but creatures native to the caves will not be considerate or your needs to live.  Finally one has to contend with Sandstorms that strip away your stamina and kill visibility and force all animals to walk, not sprint.

Why would anyone even want to play on this god forsaken map?  Resources.  Dinos available no where else. That's right, tamable, ride-able Wyvrens.  There are three different flavors: Fire, Lightning, Poison.  They each have there own utilities and breath weapons, but overall Wyvrens are among the most versatile mounts in the game.  And you can only get them in Scorched Earth.  There are a few things that make them great.  Speed:  they are faster than every other dino, but if you bump points into the speed stat they can literally fly faster than the game can render.  Flight and picking up dinos: they are better than an Argy but dont have the pick up of a Quetz.  For example you can liberate a Carno from its earthy prison, but a mammoth not so much. Weight:  You can pump the weight stat and get into the range of Paracers very easily.  It wont compete with a Bronto but it will compete with mid level Quetz's.  Finally, and this point is not insignficant, getting your hands on one of these babies is an adrenaline ride!!!

Wyvrens cannot be tamed, they must be hatched.  Since you cannot breed them in captivity you have to steal wild Wyvren eggs from a giant canyon on the South side of the map.  It pisses off all of the wild wyvrens when you liberate an egg from its' mother's nest.  So imagine flying into a enclosed lava filled space on an Argentavis with nothing but movement speed pumped so you can get away.  You find a nest, you land in the pocket on the canyon wall which limits your view of what is actually cruising nearby.  You snatch the egg and jump back on your bird to flee when you are greeted by the trumpeting calls of mythical dragon cousins enraged at your arrogance!  Yes its all that and more, and for a video game to consistently give me adrenaline boosts during this process is awesome!!!!  Oh by the way when you actually recover an egg and you start to hatch it you will learn that you literally need to raise the temperature of the egg to human life threatening levels.  And when that is done you have to feed the damn thing wyvren milk.... which you can only get from knocking out female wyvrens and milking them before they damn well wake up. Yes its hard.  Yes its nuts.  Yes its inconsistent because you don't have control over the stats or what level an egg is.  Yes its epic.

There are other creatures on the map that are beneficial and worth exporting to other servers but the Wyvrens really steal the show.  The Design team did a good job making it hard to get your hands on an adult wyvren, and then limiting their utility on the map they are found.  It really shows that you are expected to hop between these realms/arks.  When you start going down that road... well the game becomes more dynamic and strategic. 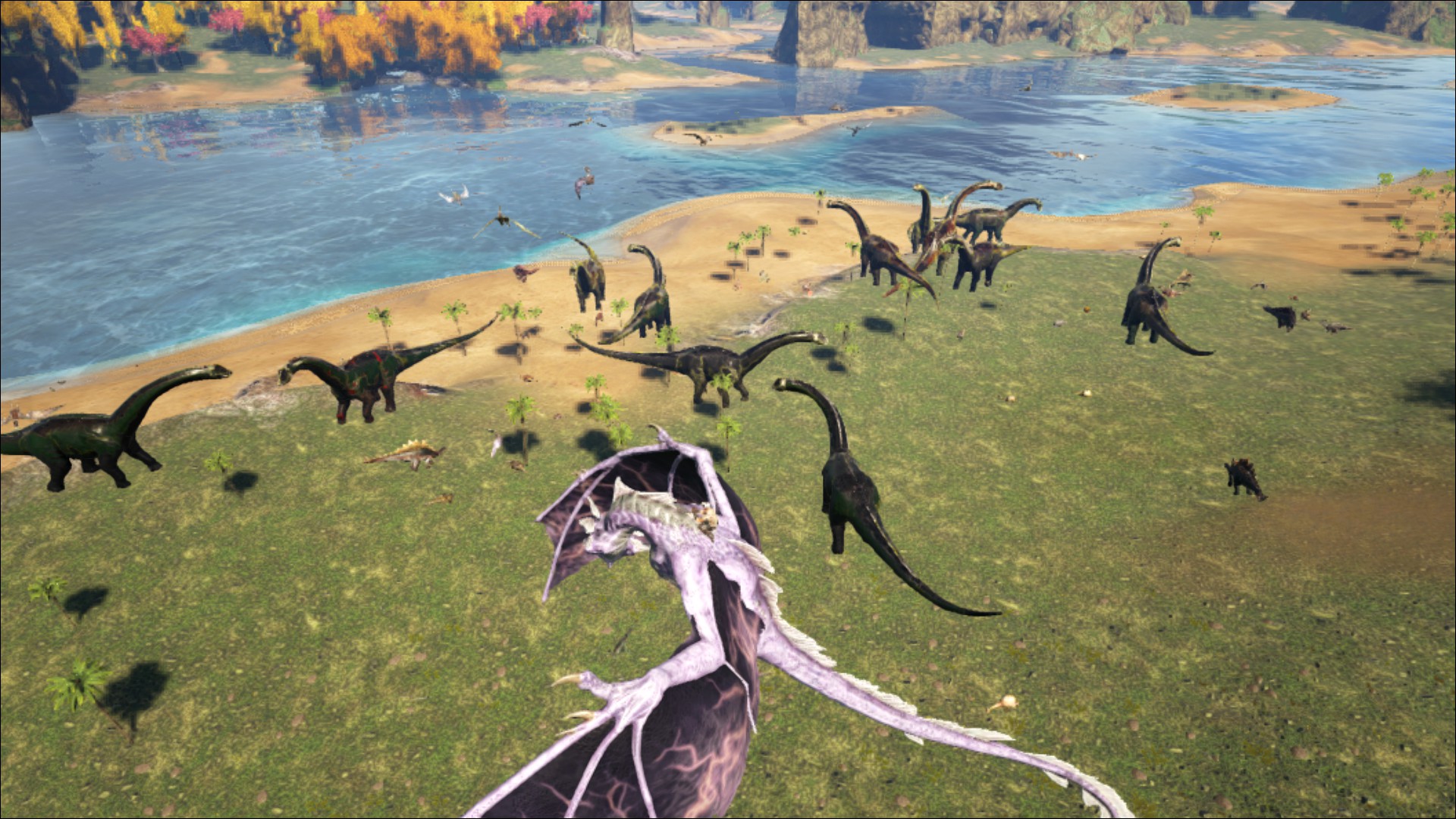 Time for a culling

The Holiday season is back as are the in-game events, we just completed the Halloween event, and I'm looking forward to some turkey antics and some Christmas antics after that.  My tribe and I have been enjoying all that this game has to offer and in that one way we are completely sold on Ark.  We even have a pool on what the next expansion will be, I'm all in on a nearly water-only expansion that introduces underwater bases and aquatic breeding.  Till then "BRING IT!"